One of the things that you notice whilst away from Conference is the actual coverage that it gets. So far I’ve yet to see any pictures of Liverpool, but the BBC ran with “less VAT on fruit juice, more on alcohol” as their 2nd or 3rd item this morning. However whilst bored on the sofa, here were the stories on their PDA version:

OTHER TOP STORIES
Cable rethink on homes of rich
Vince Cable tells BBC News he scrapped plans for a £1m home tax over fears it would hurt middle-class voters.

POLITICS
Lib Dems back Clegg health plans
Nick Clegg avoids a conference rebellion over NHS proposals but is forced to make some concessions.

Unfortunately the LibDems don’t seem to appear in one of the most important stories of the day:

TECHNOLOGY
BBC iPlayer comes to the iPhone
The BBC launches a version of its iPlayer video on demand service for the Apple iPhone and iPod touch.

This year we decided not to go to Spring Conference, even though we had paid and booked the Friday off work. The accommodation costs are too high, and nothing really happens. Instead Heather decided to work on the weekend, and we’ve booked tickets for Crufts on the Friday.
Then last night 3 13 16 15 MPs rebelled against the 3 line whip, which suddenly makes conference sound like fun (well fun if you enjoy debating the small print of the Lisbon treaty).
So should I get up early on Saturday, drive to Liverpool, not drink and then late at night head back home? Still not sure…

I’ve already said that I’m not that bothered who wins, and mentioned that maybe I shouldn’t vote, since then the Huhne team claim it’s getting close, so at 3-1

is it ethical to vote for someone where the only reason is cash? 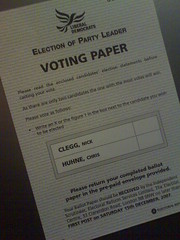 I’m still one of the undecideds. I really have no idea who I should vote for. But the question I’m asking myself is, should I bother to vote?

Last time around I voted for Ming, then when I went to conference I got evil stares from my Huhne friends and I have the feeling that whoever I vote for this time, the campaign team of the other will be making remarks about why we would have been better off with theirs and the stares will return.

But if I don’t vote neither side can blame me (unless it turns out to be a draw) and I keep all my mates happy.

As others have blogged about, YouGov have a LibDem leadership election survey with all the usual questions, but do they know something we don’t?

Would you like the next Liberal Democrat leader to commit the party to a referendum on the EU Reform Treaty?
[] Yes, he/she should
[] No, he/she should not
[] Don’t know

Everyone else seems to be blogging about last nights Question Time so here’s my review. END_OF_DOCUMENT_TOKEN_TO_BE_REPLACED

After attending the East Midlands Regional Conference yesterday where Nick Clegg and Chris Huhne did an sort of husting, I’ve finally made up my mind on who will get my vote for the LibDem Leadership. END_OF_DOCUMENT_TOKEN_TO_BE_REPLACED

As I had a slight lack of Internet access whilst in Brighton, it took some time to add the Winner Buttons to the “and the winner is“ post on LibDemVoice. However as there are some 40 posts since then I think the winning (and highly commended) authors may have missed them. So here’s a plug. Feel free to use the buttons on your own site, and the same goes for all those who made the shortlist.

Whilst the press would like you to believe that the talk of the Conference bar is Ming, it’s actual who is going to replace Simon Hughes as our President in 2009!
Campaigning has started early as people arrived at Conference wearing I’m 4 Ros badges. In a panic the John Smithson campaign had to be launched much earlier than planned and Theo got John Smithson for President badges made up on the LibDem Image stand. And last night the Lembit campaign started handing out stickers as they felt left behind.

Just not sure where the Lembit camp got their slogan from 😉