So the 2013 Women’s Super League is now over, with Liverpool the league winners and Arsenal a surprise third. Next season will see the league expanding to two tiers with 18 teams. Manchester City being placed straight in to WSL1, Lincoln Ladies moving over the Trent to Notts County and Doncaster Belles being demoted to WSL2.

There have been cries of the league turning in to a franchise system, and the money seems to buy you status. But here’s the thing, the league has one main purpose, to be filled of professional players and the only way that’s going to happen is if someone is going to pay them to play.

For the last three seasons I’ve been to most home games for the Lincoln Ladies and this year was even a season ticket holder. I preferred the atmosphere of having the games at Ashby Avenue, but do accept that the quality of the pitch including the floodlights which were player side of the advertising hoardings wasn’t as great as Sincil Bank, and as Sincil Bank is only a 2 minute walk from my house a little quicker to get to.

However after 3 years turnout in Lincoln is still low. Most games just bring in 300 fans, and those sorts of numbers aren’t helping pay the wages. I’m disappointed to see them leave, but I do think it’s in the best interest of the team and game for them to go. The Chairman (who owns both County and the Ladies) can make the most of the assets he already has like the kits, bus and especially the training facilities.

Liverpool’s reversal of fortune from being consistently the worst in the league to winners this year is all down to money, commitment and regular training. Hopefully something the team can learn from.

Despite this season being the worst placed they have been, I hope the team keep most of the players and their manager Rick Passmore. If they could just work out how to score more goals they might have a chance at moving up the league. Defensively they’ve been one of the better teams, with only Arsenal conceding fewer.

This year two players shone out, Remi Allen who would always go in for a tackle and had no fear, and Martha Harris who helped the England Under 19 reach the finals of this years Euros tournament.

And so on the problem with Doncaster. Being told you were being relegated after one match of the season wasn’t the greatest idea by the FA, however with the Women’s Premier League still running an August-May fixture schedule, teams being promoted up from this league needed to know what was going on sooner rather than later. I’m slightly disappointed that after the 11 month gaps the first time around the FA hadn’t moved the rest of the Women’s ladder to a summer schedule, but that’s where they were.

Doncaster finished their first two seasons second from bottom, have had some of the lowest gates, little sponsorship, and along with being third in line to arrange fixtures at the Keepmoat, it’s wasn’t the greatest surprise that their bid fell short of what the FA were looking for. And whether it was knowing the inevitable, or just being the weakest team this season, they finished last, having lost 8-0 to Arsenal and 9-0 Liverpool.

Positives I’ve seen this season: BT Sport have appeared to made a greater effort than ESPN did with the rights to the game, and the BBC not only have been running the Womens Football Show (although at the most stupidest time of the day for any young women to watch), but also covering results in the news. The league no longer looks like it’s just a chance for Arsenal to show how great they are, with strong competition from the other teams.

Hopefuls for next season: Higher turnouts; more games televised, it’s not as if BT Sport have much else to show to not do one game a week; a better league cup tournament now the league has 18 teams instead of 8. A chance for me and Beatie to get to some games, Nottingham is close, but not on the doorstep, and I might even attempt an Arsenal home game as well. Finally for Notts County to get in to the top half of the league, might not be Champions League material yet, but you can get there one day.

So after deciding that I wouldn’t bother this year, I gave in when the new fixture list was published last week.
After multiple lines of copy paste, edit, tweak I began to think surely my computer can be doing most of this. So I sat down and spent more time than I would have liked looking at the Google Calendar API, and finally managed to knock together some PHP which took the text I had copied from the FAWSL fixture list and inserted them as Google Calendar events.
Fortunately I can now reuse this code for future seasons and other possible events like the Euros or World Cup.
But now that it’s done what next. Well the calendar is public so if you too want the fixtures you can add the calendar to your account. The easiest way is to click the

button below. Or if you prefer ICAL or XML copy the link address and add it to your software.
As with my other public calendars I will try to ensure that it is up to date as possible, but this does require noticing when a fixture has been moved. Let me know if you spot any.

On the way home tonight the radio was teasing with breaking news, what could they mean? I was sure I knew the answer but they weren’t going to tell me until the newsreader got to her piece. It must be that someone was either pushed or jumped. Then at 17.06 it was announced that John Schofield had gone. 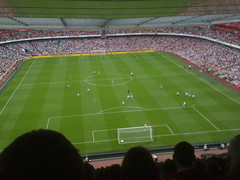 Due to my brother flying off to Australia for 6 months, I now have a spare ticket for the Arsenal v Sunderland game this Sunday (12pm).

If anyone wants to come with me the ticket is £40 and we’re sat in the Orange quad in the far back row of 28. (See left)

Please email me at ryancullen at the domain of artesea.co.uk if you want it. 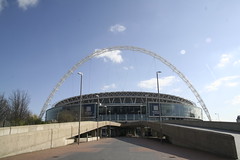 Both my second teams have made it to the play-offs. Oldham have finally managed to get there and Lincoln will be trying for the fifth time.

Hopefully one of the teams will make it to the finals, and I’m sure that if they do, I’ll try to get a ticket for Wembley.