One of the arguments the No side make is that AV will let BNP voters have a greater say.

MYTH – Will AV help to shut the doors on extremists like the BNP?
REALITY – No. Extremists like the BNP, the National Front, and the British Union of Fascists have never had an MP elected under our current system. But while we hope that AV still wouldn’t lead to extremist parties winning seats, it would certainly give them more influence. AV undermines the fundamental principle of One Person, One Vote, and rewards people who vote for fringe candidates by making them the first to get another vote counted. In some seats, BNP supporters could get at least six chances to have their vote counted – while mainstream voters would only get their vote counted once. Because the other parties would need extra votes in later rounds of counting, they’d have an incentive to pander to the extremists to try and win their second preferences.
No2Av.org

END_OF_DOCUMENT_TOKEN_TO_BE_REPLACED

On May 6th the voters on Lincolnshire cast their votes. Here is the combined results for the seven constituencies.

Yet under FPTP the Conservatives managed to obtain all seven seats.

One of the possible options for an STV election would be to have a Lincolnshire constituency with 6 MPs. Based on the numbers above both Labour and Liberal Democrats should have at least 1 MP each and the Tories 3, the final seat either LibDem or Tory.

There are some problems however converting FTPT directly to STV. To start with the tactical voters in Lincoln who voted for Labour and in Gainsborough who voted LibDem to stop the Tories probably would have voted for the party they actually wanted. As these people were never asked if they were voting tactical we have no idea how many would have changed.

The smaller parties like the Greens only fielded on candidate in South Holland and the Deepings. This one candidate if standing for Lincolnshire could have received more votes across the county, removing them from Labour/LibDems.

Also if it was true STV with you voting in preference to your preferred candidate (not party) those who voted for the UKIP, BNP, English Democrats and Lincolnshire Independents would have their 2nd/3rd/4th choices counted as their first choices were eliminated possibly giving the Tories more votes. But I’ve seen enough council ballot papers where people get 3 votes where they have voted BNP, LibDem, Green that these votes could go anywhere.

Only one thing I do know, it is deeply unfair that one party receiving less that 50% of the votes gets every single seat.

It’s a question one might ask if they visited www.lincoln.gov.uk. 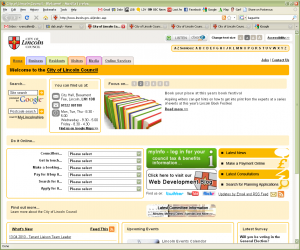 Clicking on Residents still has no clues. 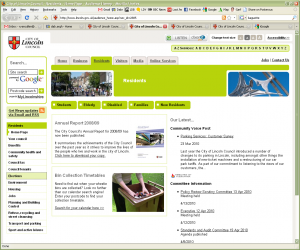 Trying Elections in the sidebar finally takes me to a bland page which has a link for 2010 Elections. 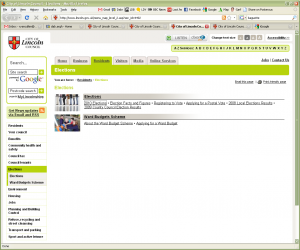 And then visiting this page I am only informed about the seats per ward for the council elections with the rules. 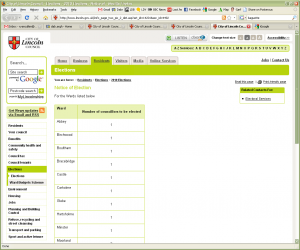 At the moment there isn’t a list of candidates for the City of Lincoln council election for which we have thirds (nominations closed last Thursday).
And amazingly there is no mention of a General Election. No information on what to do if you wish to stand, when they might be counting the result and how to register to vote if you aren’t on the electoral register.

Whilst I knew that this was never going to be the year of the e-lection, this is shocking behavior from the City Council.

Currently down Dixon Street in Lincoln we have the privilege of two Tory posters. However glancing at them whilst in the car I seem to be coming back with these messages: 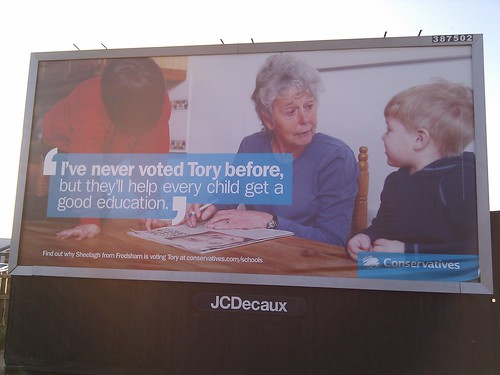 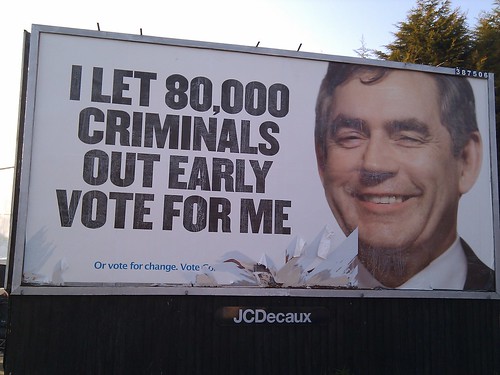 Of course on May 6th I’ll be voting Liberal Democrat.

Just picked this at random:

(292409)
61 Paul Farrelly (Newcastle-under-Lyme): To ask the Secretary of State for Justice, what assessment he has made of the effectiveness of legislation to protect (a) whistleblowers and (b) press freedom following the injunctions obtained in the High Court by (i) Barclays and Freshfields solicitors on 19 March 2009 on the publication of internal Barclays reports documenting alleged tax avoidance schemes and (ii) Trafigura and Carter-Ruck solicitors on 11 September 2009 on the publication of the Minton report on the alleged dumping of toxic waste in the Ivory Coast, commissioned by Trafigura.

A few days ago a tweet asked if those emails had been Wikileaked. Which made me think, why doesn’t Dolly just do it?
Firstly there is the “no smoke without fire”, some people will believe that there is something slightly truthful about these allegations.
Secondly, who would really believe that Dolly would be that stupid/clever to put them up there? The finger of blame would surely be pointed towards Paul or the NotW.
Thirdly, if something “did” turn out to be true, just think what kind of response the left could have towards the right?

This morning reading the Beeb website I came across this:

‘Legal’ bid over Scots banknotes
An attempt is to be made at Westminster to make it legally binding for shops and businesses in England to accept Scottish banknotes. 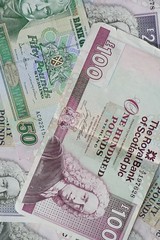 For those who have never ventured North of the border, may be suprised to find that the Scots don’t just have their own version of our notes, but 3 different versions each issued by different banks.
The reason why shops don’t accept them is that with any currency you need to know that the note is worth the paper it is written on.
I’m pretty good at spotting a forged twenty. The feel, the watermark, the silver foil, the bit that rubs off etc. But I have no idea what a scottish twenty looks like, and the same goes for many staff in shops outside of Scotland.
Forcing shops to accept them will just result in a large number of forged notes being passed around in the smaller shops miles away from the issuing banks.

Luckly this is a Private Members Bill, so hopefully it’s not going to go far in Parliament.

We’ve just moved house, not far from the last one (still in Park Ward) and tomorrow would have been our bin day. However I can see no sign of any bins out on the street. Remembering that I had seen something on the council website with a list of street names and days I tried to find it.
First I came across the GIS site run jointly with the County Council. This can tell me who is my MP, MEP, County and City Councillors, where the nearest Library, Doctor or Dump Recycling Centre is. However for the day of bin collections I just get a link back to the City Council website.
Trawling through here I can see that my bins should be out by 7am, if my bins should have been collected on Christmas or Boxing Day the alternate day I should have put them out, that the weekly large black bin trial has ended, if I have a real Christmas Tree it can be collected during the next two weeks, but nowhere I can find which day my bins will be collected on.
The closest I have found is on this page which states

To find out what collection services are available for your street, please refer to the Waste Collection Calendar (NOTE: This is currently being updated and is due to be available in March 2008).

As it’s nearly March 09, I really hope that it would be up by now.
I guess I’ll have to try the old fashioned way of working out which day the bins are, talking to the neighbours.