My latest wordpress plugin is called Better Moderation and was built to be used on LibDemVoice, but is available for all.

One of the biggest problems we have is that people like to leave rude messages, under the current system in WordPress you can add their IP address, email or name to the moderation list and in future their comments no longer automatically appear.
You might even find some keywords they like using and you can add these to the list.
The problem occurs when you login to see what comments are awaiting moderation. You look at the list and there is a new comment, but why has it been moderated? Maybe a swear word, in the past you added them to be blocked, one of the other admins manually moved them to the moderation queue, might just be too many links, or a collection of these rules.
So you approve the message, it appears on-topic, but the reason was that someone else in the team had decided that this person was no longer welcome.
END_OF_DOCUMENT_TOKEN_TO_BE_REPLACED

So this morning LibDemVoice announce that it had been bought out by Lord Ashcroft as was renamed LibDemHome.

Of course being announce in the morning of the 1st April it was just an April Fools joke. One first conceived over two years ago, and started three months ago, but to ensure that everything went smoothly (and that I didn’t have to flick a switch whilst asleep) here are the steps used to have a new domain name, different theme and redirects.

END_OF_DOCUMENT_TOKEN_TO_BE_REPLACED

This simple WordPress widget allows you to have the Twitter widget on your sidebar.

I wrote this widget for a client who wanted the new Official Twitter Widget, however all the WordPress plugins I came across either used the plain old widget, or did their own thing with the data.
It’s based (heavily) on the work from seanys, which used the old widget.

To install either use the built in plugin installer and search for (Un)official Twitter Widget, or visit the WordPress Plugin page and download the file, unzip it, and FTP it to your /wp-content/plugins/ folder.

Do you scheduled lots of posts on WordPress?
Do you then find yourself posting an immediate post 10 seconds before a scheduled post is going live?
Do you kick yourself for ending up with two posts so close together?

If yes to all three, then my plugin may help.

Scheduled Planner is an admin plugin which appears in the Add New / Edit Post section of WordPress. At the moment it just rests in the top right as I’ve yet to work out how to make it in to a nice widget. It shows the last two posts published on your blog, and then all the scheduled posts. Allowing you to work out if it is safe to hit Publish or if you should schedule this post for 3 hours time. 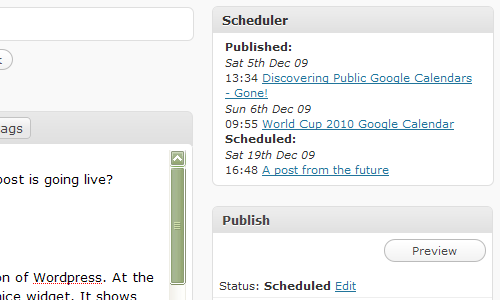 This weekend I have been mostly playing about with Twitter.

First I created a CNPS (Consecutive Number Plate Spotting) TwitterBot. The bot watches for @ and d messages to it, it then adds the plates to my database. Anyone with a Twitter account AND and Artesea account can get it to work, just visit the mashup page here for more info.

Next I managed to exceed the weekly allowance for tweets to my mobile. Think it was something to do with a large number of followers at Conference.

And just now I’ve installed a New Post -> Twitter plugin. This one seems to be one of the best as it’s run from my webserver (doesn’t require frequent polling of the rss feed), and it has the option to enable/disable tweets for draft, edits or new posts, so unlike other who have similar plugins you should only get a tweet from my blog when I hit Publish.

I wanted to put a WP-Admin link on my blog, but one which only showed to me whilst I was logged in.
So hunting through the WordPress Codex I tried to find something like is_admin(), but couldn’t find it. Then going through all the PHP files I found this function current_user_can(capability) which returns true or false if the logged in user can do that capability. Next I had to work out a capability which only admin could do, but a quick look at the source code showed that it should be possible to enter an integer which related to a level.
So finally I have this on my blog:
<?php if(current_user_can(10)) { ?><a href="/wp-admin/">WP-Admin</a><?php } ?>

I’ve been playing about with WordPress plugins all day, and have created (more like stolen and modified a small amount) Tidy Slugs.
This plugin tries to catch a few of the random stuff that WordPress misses when I make the post slug.

For example if my post title was:
Ryan's Tidy Slugs, WordPress would make a URL of blog.artesea.co.uk/2007/11/ryans-tidy-slugs.html

however if it was:
Ryan’s Tidy Slugs (notice how the apostrophe is slightly more curvy) it would be blog.artesea.co.uk/2007/11/ryan%e2%80%99s-tidy-slugs.html

(OK, you might not be able to spot the difference as WordPress loves to curve the apostrophes, however try creating a post title using the second one).