In Thursday Echo we had the front page How does your garden grow?. The article is about the Environment Protection Team taking four households to court over the state of their back gardens. All of them had been asked several times to sort them out, and finally the magistrates fined them over £150 each.
Hopefully other households in Lincoln will realise that the mess in your backgarden affects your neighbours and that the council have a right and a duty to sort it out. 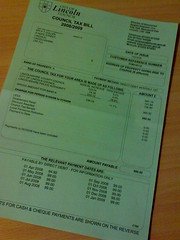 The BBC are saying the City’s Christmas wheel scrapped, which may mean that the Pudsey Party in Lincolnshire might want to rename it’s location.
Hopefully BIG can find either a new wheel, or something else to fill the City Square this Christmas.

On the way home tonight the radio was teasing with breaking news, what could they mean? I was sure I knew the answer but they weren’t going to tell me until the newsreader got to her piece. It must be that someone was either pushed or jumped. Then at 17.06 it was announced that John Schofield had gone.

In the last round of Post Office closures the branch on Cross Street was closed down. At the time we were told that we could easily get to our second nearest Post Office which is located on the High Street opposite St Peter at Gowts school (also the name of the branch). However according to todays plans this branch is now also to be closed.
How long before Lincoln is just left with one Post Office? 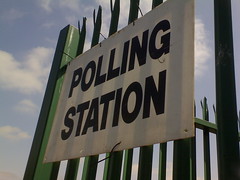 I would like to thank those who elected me last year, and voted for me this year. However with the boundary changes and all-ups unfortunately both Heather and myself are no longer the councillors for Park Ward. The Liberal Democrats did avoid a complete wipe out with Helen Heath taking one of the Labour seats in Carholme Ward.
The Tories did what they promised all year and took control of the council from Labour with 17 councillors (up 6). There was bad luck for Claire Metcalfe (Con) who got elected with me last year, she came 4th in Glebe, losing out to her 18 year old daughter Charlotte (Con) who came 1st and I wish Sandra Gratrick (Con) the best of luck next year having to stand for the third year in a row even though she’s been elected twice.
This years other losers were: Steve Allnutt (Lab); Lesley Rose (Lab); Larry Wells (Lab); Morris Cookson (Lab) and Geoff Ellis (Lab)

Is it that hard to understand? Again I’ve purchased another coffee from Starbucks only to find out that the vanilla was missing. Normally it’s the new Newark branch who forget something, but today I was at the Lincoln High Street one.
However I only paid £2.25 today, so it looks like I got free cream.

A small panic yesterday. I started to play about with Live Local plotting the 12 candidates for Park Ward, when a colleague asked where were I? Only at this point (about an hour after printing out the list) that I realised my name wasn’t there.
A quick email to the deputy returning officer and a reply within minutes apologised for the error, pointed out that they had already spotted it and were just uploading the new list.
Phew!

Well the papers are in and have been verified, and assuming I don’t pull out I’ll be facing re-election for Park Ward this May. Due to us having boundary changes I only got one year as being a councillor, and there is the possibility that if I get the 3rd largest vote I’ll be up again next year! Good luck to all the other LibDems from across the country, including my better half Heather Quinton, who will be joining me in defending Park with our good friend Stephen Morgan.

Today at full council the Liberal Democrat group refused to vote for the budget. The only reason for doing this was because the budget arrived on our doorstep on Friday 2nd March, after we had already departed for a weekend in Harrogate.
We found it totally unacceptable that such a serious document which was between 150-200 sides of A4 was sent out as an “item to follow”. If the controlling Labour group expect a debate, an amendment or even an alternative budget we expect next time to receive the paper at least two weeks in advance.
We had also decided that under the same reasoning, if the opposition Tory group had submitted or proposed any changes that this too would be voted against.
Several Labour councillors failed to understand our position, believing somehow that the few consultation sessions to decide what priorities should be made are equivalent to analysing the full and complete paper.
Let’s hope that next year, whoever is in control that we can have a serious debate about how we are to spend the tax payers’ money, by ensuring that everyone has a full chance to read and discuss the proposals with the relevant officers and political groups.