A follow-up to the post on Sunday regarding the black bags in Park Ward which are still on the streets. I’ve got an email from the officers informing me that they should be disposed of tomorrow.

Subject: RE: FW: Fly Tipping/Posting: 03224017
In an effort to look through all of these bags they were left in the street until an Enforcement Officer had looked through them all for evidence. This has now happened – a few addresses have been found and action will be taken. I have now told Cory that the bags can be collected and this will happen as part of the full cleanse of the street tomorrow.

I’ll just have to wait and see.

After an email to the council on Thursday evening and with the rubbish still out on Saturday, I decided en route to the High Street I would take photographic evidence of the fly-tipping problem I’ve got not only in my ward, but metres from my house. 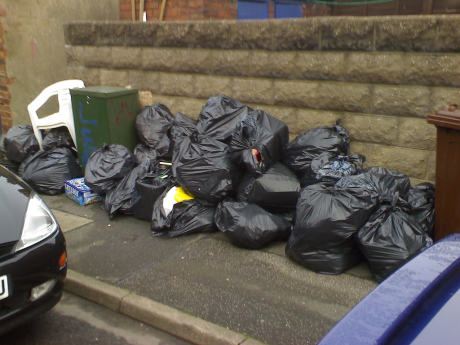 For over 10 weeks now we’ve been using wheelie bins in Park Ward, as the majority of the house have small alleyways we have two 120 litre bins. A brown one for recycling which is collected every other week (and if that’s full you can leave more to the side if it’s clearly recyclable waste) and a black one for landfill waste which is collected every week, but no side waste. This includes black bags which are no longer collected, however it seems that some households in Park Ward just don’t care and continue to dump and allow others to dump black bags outside their houses.

I’ve got into the habbit of checking Google Analytics daily to see which search phrases are used to find my site. Most are related to mobiles, 24 or E4 however this one caught my eye: 20mph wheelie bin.
So I got Google to tell me which search engine was used (Yahoo) went there myself and tried the query. The results showed that I’m fifth 🙂
However what was disapointing was to find a Mr Stephen Tall first!
I’m sure my blatant attempts to use SEO tricks will force me to be top before the end of the year.
ps. if anyone knows exactly what was searched for please let me know. 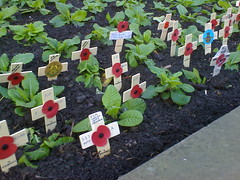 These last two days have seen me fulfilling the Civic duty part of being a councillor. Yesterday being the 11th November I was invited to attend the Remembrance Ceremony at the Lincoln War Memorial on the High Street. It lasted for around half an hour, and I stood fully gowned with the other councillors in front of all the shoppers who had taken time to stop and remember. Today I was invited to attend the Remembrance Service at Lincoln Cathedral. The Cathedral was filled with ex and current service men and women, as well as family and members of the public. Any event at the Cathedral is always lovely and well set, and being a councillor I got front row seats this year.
Next on the list of Civic duties are the Christmas lights switch-on this Thursday and the opening of the famous Christmas Market next month.

Now I know this is already possible elsewhere but yesterday Lincoln launched it’s new Park & Pay scheme. Instead of having to find loose change when parking in any of the council owned car parks you can either call or text.
I’ve already pre-registered with the partner company Verrus, so now when I next park at Lucy Tower car park for 2 hours all I need to do is text 7852 2 to 07950 080201.

As reported in the Echo on Friday the wheelie bins for Lincoln have been delayed for a month due to the suppliers not making any bins.
With the original roll out supposed to begin this week, we were only told by the council on Thursday about the delays, who in turn were only informed on Monday.
It’s a real shame as hopefully the wheelie bins will end the consistent problem of black bags being left out days early.
Unfortunately the council have yet to put the any information about the delays on their website, but FAQs about the changes can be found here, alternatively you can call the council on 01522 873700 for more information.

I live in a 20mph zone, we have terminal signs at all entrances informing people that they are entering the zone, but once in it they are only reminded it is twenty when exiting the zone.

I wrote to County to see if repeater signs were possible as they are in the West End. After months of waiting I got this reply.

Regarding your query about 20mph Zones and additional signs, the Sincil Bank Area is subject to a 20mph Zone and as such the use of 20mph repeater signs within the area is not allowed under the signing regulations. Any motorist, when driving off from being parked in the area, should know that they are within a 20mph Zone as they cannot enter the area without passing the 20mph Zone signs.You refer to the West End scheme, this area is covered by 20mph speed limits which does allow the use of repeater signs. This was introduced in this area, rather than a Zone, because of a bus route running through the area, which prevented the use of road humps and speed tables.

Surely this couldn’t be correct, a 20mph zone isn’t allowed repeater signs?
So I used Google to look for more information (notice how I didn’t google 20 mph zone).

After finding many local council press releases I found the Department for Transport website. I read through 20 mph speed limits and zones which didn’t tell me either way, next I tried Speed: Know your limits which on page 11 told me.

So surely here was my answer, driving away from being parked outside my house at no point do I see any signs to the contrary, so the speed limit must be 30mph. But I knew that it couldn’t be that simple.

Looking at the References in the 20 mph speed limits and zones from earlier I could see something that might be useful TA Leaflet 1/95 Speed Limit Signs – A Guide to Good Practice, a search on the DFT website lead me to this page which states

Wow capitals, so County weren’t lying, we can’t have repeaters in the Sincil Bank Area.

Time to pester one of those Transport Minsters I think.

Today’s Development Control meeting lasted 2.5 hours, longest meeting I’ve had so far on the council.
I knew that when I put my name forward to be on the committee that meetings could go on for some time and I’ve been expecting worse.
We had 12 applications to consider with the longest being the land to the rear of 41-69 Hykeham Road. It was obvious in advance of the meeting that this might take some time. The applicants had submitted two applications offering two options for access to the site and there were 40 pages in the agenda taken up. Almost everyone who lived on that bit of Hykenham Road objected, as well as the 3 ward councillors and for the first option even the County Council Highways and Planning department.
The rules for speaking to the committee are 5 minutes against, 5 minutes for any councillor and 5 minutes for and we had all of these twice.
In the end we voted against the development (as per the recommendation from the officers), but I’m sure we’ll see an official objection to the decision.
Six applications were approved without much fuss. One extension application was obviously going to lead to neighbours not talking, but either way the vote went that would happen (we approved it). The new development for 29-31 The Strait and land to the rear were exciting to see and also approved.
The only application which split the committee was for the former Community Rehabilitation Centre on Long Leys Road. I felt that we couldn’t object to the application, in line with the officers. Others felt the building were too high, too dense and not following the draft for Long Leys Urban Village. The application was rejected, but a vote on the rejection lead to a chairs casting vote against the reason to object. Finally I proposed a motion to reject based on the officers opinion which was passed.

Whilst it sounds confusing that’s nothing compared to LDYS policy debates. 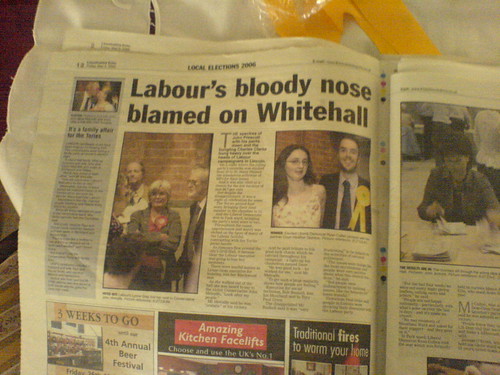 Me in the Echo

The Lincoln Liberal Democrats celebrate getting their second councillor on to Lincoln Council.
ME!
Thanks to all those who voted for me, and to all those who went out and delivered my leaflets.