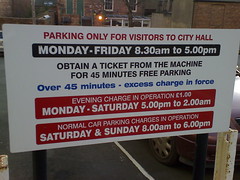 Today’s papers and Direct Line would want you to believe that the cost of parking your car has soared. Citing Berkhamstead as an example, where on average parking for two hours will now cost you a whole £1.08 (was 10p). If anybody really believes that £1.08 is an extortionate price for car parking they haven’t been to London.
Worse is the panic that the overall average has gone up from 86p to £1.21 in six years. A price rise of about 6p per year. 6p!!!!!!!
It reminds me of the people moaning about the recent rise for the Dunham Bridge toll. This year saw a 20% increase, which to cars was 5p. Now unless those opposing price increases want a yearly inflationary increase of 1 and 2p and are willing to have a stack of coppers, a 5p rise after four years ain’t bad.