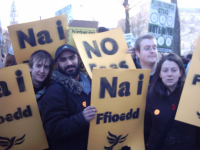 With yesterdays demo in Wales, and today’s piece on the BBC about how Leeds Met and the University of Bradford might not charge full fees, I though I would post about something that happened around 3 years ago.

Whilst at Warwick University, in 2000, we had a EMG motion on Top-Up Fees, and it was almost my amendment that caused the sit-in in Senate House (SWSS got theirs in first by about 1 second).
After this, the Vice Chancellor agreed to appear in a debate with the President of the Union, one of the Economics lecturers and some other people.
Now the key fact that I remember from this debate, was that Warwick University was only £25 per student short in their funding.

Now clearly in the last 4 years, this can’t have raised to £3000, yet Warwick in it’s effort to seem to be one of the top universities, is refusing to lower the price.

It’s good to see that the variability that the Top-Up fees bill introduced, will be completely ignored, something that I was predicting 4 years ago.