On Friday (actually more like early hours of Saturday) me and Heather decided to go to Birmingham for the weekend. We booked a room at the Premier Travel Inn and then after a short sleep made our way towards Bournville. 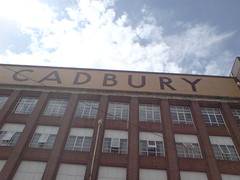 We had attempted to book tickets in advance for Cadbury World however you can’t book tickets on the day via the website. At £12.50 each it was a little dear, and the free chocolate was melting quickly. However the historic facts about Cadbury were interesting and it was a nice day out.

We then headed to the hotel to check-in, and then went out to the Bull Ring. I’ve been a couple of times to the new Bull Ring and it’s amazing how the place is so much nicer than before. We wandered around the shops until we almost fell asleep. The only problem I had was the litter. It was really disgusting. Some of the litter was from a red mobile phone company, but most of it was wrappers from an ice cream van that was giving out freebies.

We then headed back to the hotel for dinner and a good night’s sleep. 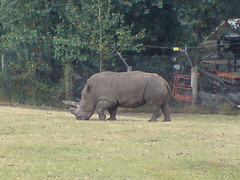 On Sunday we made our way to West Midland Safari Park, this was only £8.99 each and we got a lot more for our money. We spent two hours driving around the safari and there was loads to see. I think we both enjoyed the elephants most. However as they were the furthest away from the car the photos aren’t that great. After parking the car we had a look around the rest of the park, and whilst watching the snake man do his presentation I managed to get stung by a wasp, who decided that flying up my sleeve was a great idea. I panicked like a small child until the wasp finally flew away. We had a look at the theme park rides but at an extra £8.75 each to go on all the rides, and none of them being that exciting we gave that a miss.

Overall though we had a really nice weekend.